This was not a race I’d been planning to run or was preparing for. A friend of mine had registered and unfortunately she was unable to run it. Thankfully the race directors allowed her to transfer the bib to me at short notice.

This was my third half marathon, and the most challenging to date. I knew it was going to be difficult as I had ran sections of the course before. However, now it was a race. Knowing how hilly the out and back course was, I had accepted it was not going to be a PR run for me, and I was fine with that.

I convinced Zach (and he convinced his training buddy, Courtney) to sign up on the morning of the race. It’s much more fun racing with friends.

Access to, and parking at the race was great. There wasn’t much traffic and there was plenty of places to park (at surrounding businesses). From the parking lot, the race start was across the road, just outside of Umstead State Park.

The half marathon start time was 7.00am. There was also a 10K which started at 7.20am. I estimate maybe 300 runners for the half — so quite a small local race. It was an open course too, so there was no stopping other runners or cyclists from using the trails with us (and there were quite a few doing just that).

The whistle blew, and off we went. The aim was to stay slightly ahead of the 2:00 pacing group as we wanted to finish under 2. I arrived at this target scientifically of course.

The first few miles felt really good. We were easily keeping a nice gap between us and the pacing group. The hills were slowing us down a bit but we were still tracking at a decent pace.

It wasn’t long after the turnaround, maybe a mile or two, that I had to let the pacing group pass me and come to a realization that there was TOO MANY FREAKING HILLS on this course to complete it in under 2 hours.

At mile 9 (why is it always mile 9!?) I couldn’t keep going on long incline. Zach kept going strong but I had to stop running and walk and watch him disappear into the distance.

The humidity was getting to me. At every water station I was drinking at least 2 cups of water/Gatorade, which I’ve never had to do before. My clothes were drenched in sweat – even my socks were drenched.

After some one-on-one time with God, questioning life in general, the course started to flatten out around mile 10. I was now running again. The next mile and a half was downhill which helped, even though my legs felt like lead at this stage.

There was one more brutal hill at the 12.6 mile mark all the way to the finish. As I started the final ascent, I was surprised to see Zach ahead — not far at all. I made a valiant attempt to catch him, but ran out of steam quickly. He turned around and waved, and then put in a little extra effort to cross the line.

I found out later he considered waiting for me so we could cross the finish line together, but he feared I would run past him. And yes, I would have done exactly that. So he made the right call to run for the finish.

I crossed the line about 20 seconds after — happy to be done. 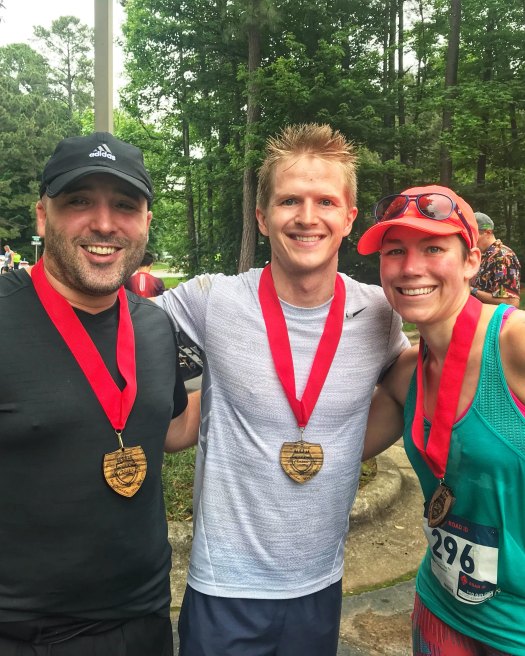 There were plenty of snacks after the race, but no beer. I mean, come on. I could have murdered one or two cold beers after that race — easily. I did manage to pick up a nice race shirt though (which is modeled below) which somewhat makes up for it.

Someone asked me if I would run it again. Yes, probably. I wasn’t happy with that performance at all. It beat me, told me I sucked, so I want a chance at redemption. I’ll be back sometime, NCRC Classic Half Marathon. You wait and see. 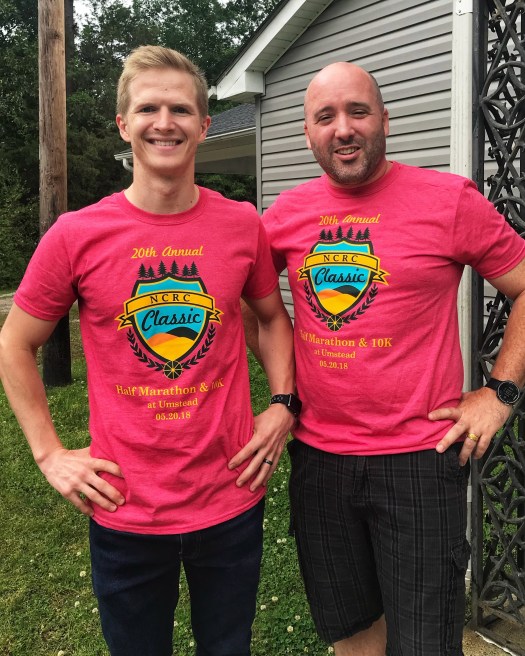 It was felt so good to get back out on the trails at the weekend. It was my first time trail running since RAD in early December. It is also the first time I have ran the trails (bar the fire roads) over at Umstead State Park.

Saturday was such a beautiful day. The sun was shining, not a cloud in the sky. The temperature was right around 60°F. Perfect running weather.

Only I didn’t run on Saturday, oh no! I ran on Sunday morning in the rain instead! At least it was still 50°F.

END_OF_DOCUMENT_TOKEN_TO_BE_REPLACED

I get so excited when I find out about new running routes. Anyone else?! I map them out on Strava and then plan how to work them in to my schedule. I’ve decided I’m going to start sharing these routes on my blog.

This is one of the latest routes I’ve been looking at (I have not ran it yet). It’s just under 8mi (one way) and starts at the new Reedy Creek Trail Head parking lot (off Weston Parkway on Winstead Dr). Most of the route lies inside Umstead Park, with a couple of miles on sidewalk, before arriving at the NC Museum of Art.

Liz and I checked checked out the trail head parking lot at the weekend, so now it’s just a matter of getting a group together and setting aside some time to run it! I’ll be sure to post an update when I do.

Second run this week!
🎵Hello, it’s me. I was wondering if after all these years you’d like to meet to go over everything 🎵
Friday afternoon vibes…