Disclaimer: I am promoting The Savannah Bridge Run as part of being a BibRave Pro. Learn more about becoming a BibRave Pro (ambassador), and check out BibRave.com to review, find, and write race reviews!

My wife is a city girl. She loves weekend trips to cities to soak up the buzz and the night-life. Last year we spent a few days in Savannah, GA and it did not disappoint. It’s a beautiful city, full of character and life.

I was pretty pumped when the opportunity to race the Savannah Bridge Run came along. Unfortunately it turned out that the dates would not work for me so I will not be running it this year. Instead I am telling YOU why you should run it!

Before I share more about the city of Savannah, let me tell you about the race. It is known as “the South’s toughest bridge run”. It is also named one of America’s top 20 races under 10 miles by The BibRave 100.

Races with costume contests can be so much fun. I’ve never actually taken part in one, but always wish I had when I see the efforts some people go to. It always make me smile — especially the really bad ideas. The race awards cash prizes for both group and individual entries.

There’s one thing I know, Savannah knows how to party. After the race, participants will enjoy live music, beer and food in Franklin Square, downtown Savannah.

If you can, I encourage you to spend 2-3 days in Savannah over race weekend. It’s an amazing location with lots to explore. Most of which can easily be explored on foot (or a recovery run).

We just loved the river side streets and cobblestone. It is packed full of little art shops, restaurants, coffee shops, gift shops, etc. The coffee and desert shops that open late are amazing — I can totally recommend Lulu’s Chocolate Bar. There is lots of good food and treats to choose from while you’re there.

Use the code BIBRAVE2020 for 15% the race registration.

I blogged recently about experiencing dizziness during my run last Saturday, while visiting Ireland on business. I thought at the time it was simply related to a combination of jet lag and dehydration.

The dizzy feeling went away on Sunday, and as I blogged then I felt just fine, hopeful I’d get back out for a run on Monday evening.

This wasn’t to be.

On Monday at work the dizziness returned. By lunchtime I had thrown up in the restrooms and had to be taken home by a co-worker.

I could write a whole post on the sole topic of getting an appointment with a doctor in Northern Ireland, but to cut a long story short, I ended up in A&E (ER) on Monday evening.

END_OF_DOCUMENT_TOKEN_TO_BE_REPLACED

As I left home to go to the airport, the first flakes started to fall. My wife sent me pictures of the kids playing in the snow which made me miss them already. I was on my way from Raleigh, NC to Ireland for a work trip.

It was a pretty turbulent flight, but I felt OK and do not usually suffer with travel sickness when flying. I had to put my book down when it got really rough. Nothing else.

I arrived in Ireland to more snow and freezing temperatures, collected my car and drove to my parent’s house. After some catch-up, I thought I’d get a run in.

I decided I wouldn’t run outside, but instead use my parent’s treadmill. So I put on a pair of shorts and long sleeve top (it’s still cold inside). However, the treadmill was a no-go, The belt is slipping and I couldn’t run on it.

That’s leaves only one option…

I had to head outside. I grabbed my gloves, hat, buff, and off I went. I was pretty prepared, I thought. I had my trail shoes, which were great in the snow. I had a buff to keep the cold air off my face, and a nice hat. Even with shorts, it was manageable. 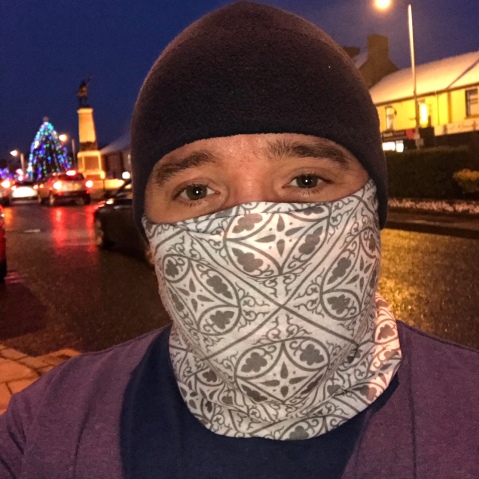 The first 1.5 miles felt good. No issues at all.

Then something didn’t feel right. At first I kept veering off to the right as I ran. I was loosing my balance. When I eventually stopped it hit me hard. My whole world was spinning. I waited a few minutes to see if I could shake it, but it wasn’t going away.

I started to walk back to the house and was staggering all over the sidewalk. I couldn’t walk straight. I felt like I was going to pass out. I kept walking, and due to complete disorientation, ended up the wrong road and had to come back down. At this stage I was hoping the police would pick me up for public drunkenness and take me home.

I made it back to the house eventually and immediately threw up in the bathroom and then laid on the bathroom floor for a while. Can I just say, no alcohol was involved here at all. But that’s probably what it looked like, and felt like though.

After a hot shower, I drank some fluids, in case it was dehydration, and ate some chocolate in case it was low blood sugar. It took around 3-4 hours to feel normal again.

Today I will rest, and not run.

This boy is done with watching Lacrosse games. #lakenorman #lacrosse
We want to be mixologists when we grow up.
On Monday we went strawberry picking. On Wednesday we still have too many strawberries.