I ran this race way back in December last year and just noticed I had’t posted a review on it. Well, better late than never, right? This was the 2nd year I’d ran Race Across Durham. The first year, I signed up and ran it on my own, this year I brought a few pals along.

The trail conditions this time were really wet. They had to change the full marathon course drastically because of flooding. It looked like the 10 mile course would stay as planned, but on race day it was shortened to around 8.5-9 miles.

I’ll be honest, I didn’t mind that at all. My race pretty much sucked that day and I was glad to be done. I had really low energy and was not competing at the same level as the previous year. I found out later when I got home that I was running a fever which helped explain things. 🤢

I love racing (and training) along the Eno. The course had a few surprises this year too. There were a few bridges that had washed away in recent storms, so a couple of extra creek crossings were required!

In preparation for this race, I didn’t train quite as much in the Eno River State Park as last year, opting instead for the closer Umstead Park. The latter was a better option for the group, but I’m not sure provided the same level of training we needed.

The medals were hand-made again this year, using a slightly different design. I love these unique race medals. Check out last years review to see the medal from 2017.

As per last year, the food and drink afterward was great! We grabbed a table, and ate and drank as the band played. I have some video of Niles dancing, but she might kill me if I post it.

Friends and family can easily join for the post-race party if desired.

Race Across Durham is a race I look forward to every year now, and I’ll be signing up to run it this year again, no doubt about it. Registration usually opens at the start of July.

The 10 mile course is point-to-point. At the end you need to wait for a bus to transfer you out of the park and back to the start line where the post-race party takes place. This year the transport seemed to take longer — maybe I just got lucky the year before? We were waiting in line for what seemed like an hour to get on a bus. But. we made the most of it…. 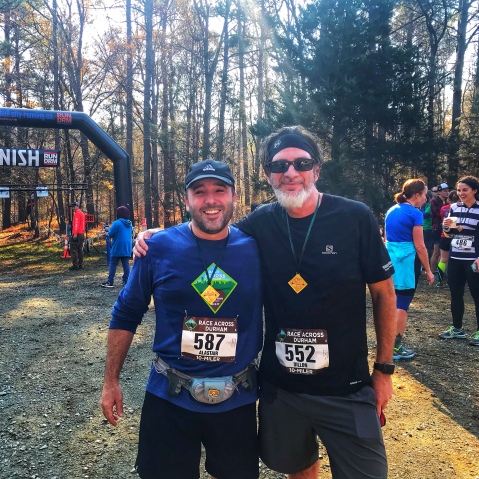 I am so pumped to be running the Race Across Durham 10 Miler again in December this year. I ran in the inaugural event last December and absolutely loved it. Like last year, registration opened on my birthday, so it’s instant (hopefully annual) happy birthday present to me. 🙂

This time, not only is my buddy Dillon (above) running it again, but so is his wife, AND SO ARE ARE A FEW of my Morrisville Run Club friends. It is going to be freeeeeaking awesome!

Yes, I’m a little excited. Looking forward to training for this one already. It’s such a beautiful place to run.

I just signed up for Race Across Durham (10 miles) trail race! It’s scheduled for December 3rd, 2017 at 9am, so it should be nice and cool and have no nasty black flies, right?

It winds along the Eno river in Durham, starting at West Point on the Eno park to Eno River Rock Quarry.

I’ve been running some trails recently, but this is the first trail race I will participate in. I’m pretty excited about it.

You can check out the route here. Strava calculates it as 8.4 miles and estimates I’ll take 1hr43m to run it! 🙂

I did just notice it’s up hill the whole way! Great!

Hey everyone! I got out for a nice lunch run today. It felt fairly good overall. I still have to lean on my PT sessions and really focus on my form.
Yesterday, a church I had helped to launch and was heavily involved in for 10 years held its final service. I was so happy to make it over there (albeit late) to see some old faces. Being there brought back so many good memories. We had some great times together over the years. I’m excited for the next chapter for Pastors Jeremy and Kimi. #churchplanting #nextchapter #goodtimes #goodmemories
Played a little music outside this morning at the middle school #church service. It was good fun!